One of the things I’ve been struggling with recently (yes, that was me that you saw wrasslin’ on the floor with the toaster, an artichoke and some precast concrete yesterday) is Blender.  Blender is an the open source 3d modelling, animating and rendering package.  For the Luddites in the virtual room (yo, represent) that means it’s a program that helps a digital artist (or in the alternative, some dude who’s whacking away at the keys with precious little that one might call a plan) create and bring to life a virtual 3d world with virtual 3d objects that can move and change form.   It is an amazingly powerful piece of software, and it’s free – how can you not, as a self-respecting nerd and computer geek, open it up and start poking around to see what you can accomplish?

The catch is that the learning curve on this stuff is steep.  This is the kind of software Pixar uses to create their movies (though Blender is not the actual program they use – they pay good money for their code at Pixar).  There are good reasons that it takes a fair chunk of time to crank out one of these movies.   In addition to the usual time necessary for dream up a half-decent idea, there are a number of additional complicated tasks that need to get done.  Trying to model (build) the objects in virtual 3d space is a bit of a brain bender for folks like me, whose visual and spatial sense is somewhat compromised – Spouse once drew a shape on my back and my job was to guess what the picture depicted;  she had drawn the highly complicated form of “a box”, and I was stumped.  No foolin’.

As far as Blender is concerned, trying to learn to use this software and its interface correctly and with some skill is complicated by (mostly) poorly written available documentation.   Far be it from me to look a gift horse in the mouth, and I appreciate that this documentation is being provided by individuals who are just trying to pass on a little bit of knowledge about the software that they’ve figured out, but most of the tutorials out there on teh Intarwebs on this stuff are barely comprehensible.   The actual functionality of the software is top notch and I still have some difficulty believing that a package like this is available – to everyone – for free.   The literature that tells a guy how to use it, however, sucks.  For an example of one impenetrable lesson, click here.

Nevertheless, I’ve been wading through some of this material because I need to be able to work Blender with some proficiency for one of my Projects.  The Project in question is a short video in the style of a cartoon (though featuring live action video);  I would like to add some animated objects into the video for comedic effect – enter Blender.  In particular, I’ve been trying to model and animate a bouncing basketball.  You wouldn’t think it’s so darn difficult to make such an object – it is, after all, only a sphere – but then you have to add those crazy lines on the surface of the ball.  For the better part of three days, whenever I’ve been able to put in a bit of time in front of the Digital Overlord, that time has been roughly equally divided between my rotisserie hockey clubs and my clumsy attempts at fashioning a bouncing orb of the desired type.  I did find a tutorial about modelling a tennis ball – a kind of halfway house on the way to my basketball Nirvana – and the tutorial is even more informative than most.  My persistent (but misguided) efforts over the last few days, however, have resulted in nothing but a series of mangled and deformed masses that were not even remotely recognizable and mostly resembled a Jell-o mold that had been whipped out of a car and into a lamp post.

But guess what?  Today, I have achieved a measure of success, and because this site is my designated spot for doing this kind of thing, I’m going to strut around a little bit and show you some preliminary results. 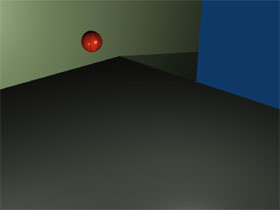 Now, keep in mind this is naught but the basketball (hey, that would be a great name for a band), and a still image of the test scene I rendered to boot , but that’s my roundball dropping to the floor so insouciantly.  If and when I take the next step and successfully incorporate the virtual objects into my live action video, I will attempt to learn how to post an animation of the bouncing ball on this site.  For now, however, that little task will have to become My Next Project.