Hulk 2 is being filmed in downtown Hamilton right now.   Spouse and I went down to take in some of the movie magic and I brought along the video camera, hoping to capture some explosions and other cinematic truths.  I was not disappointed.  I suspect that this film will not focus overly much on character exposition and a search for human truth;  rather, the subject of the film is more likely to be “black powder and the things it blows up.”  I got a lot of video of the tableau below the window from which Spouse and I were watching:  a burnt-out NYC bus with a demolished sedan lying crossways across what would be top of the bus if it had any roof left, lots of (propane fuelled) flames everywhere, and a series of explosions that made the assembled extras eschew their previously lethargic ways and run screaming down the street.

Here is a picture from the video I took of the scene below: 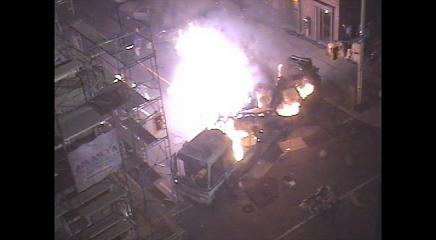 We were getting ready to leave after watching an hour or two of this good-natured fun, when I noticed that the movie guys were hooking a cable up to the arse end of the burnt out car.  The other end of the cable was attached to a truck parked about a hundred yards down the street that had a device on the top of it that looked to my untrained eye very much like a catapult.  This state of affairs quickened my pulse and heightened my anticipation, as I concluded from these details that there was an excellent chance that we might see a burning car get flipped up into the air and flung down Main Street.  This is something we only see here in Hamilton about once a month, so I was very excited.

Unfortunately, as the night wore on and I patiently watched the movie guys setting up for the much anticipated shot, reality began to intrude upon my happy little Utopia.  As the clock struck midnight and kept marching on, Spouse and I began bargaining about how much longer we would stay in hopes of seeing the money shot.  “Fifteen more minutes,” she said “and then we really have to go.”

I love my wife very much, because she said that to me not once, not twice, but THREE times – though she had to be up early for work – and still no flying car.  At 12:45, having watched the pyro technicians pour black powder into every conceivable location, string about six hundred yards of detonator cord, and smear every inch of every metallic surface with an obviously very flammable jelly-like substance, I was crestfallen.  It couldn’t be much longer before The Shot.   “Okay, we can stay ’til one o’clock, but then we really do have to go.”  One o’clock came and went, sans flying car and Spouse pretended not to notice for about five minutes.  Then we both began to accept the inevitable – Spouse perhaps more maturely and stoically than I – and we started gathering our things to leave.  Almost immediately, there was a flurry of activity outside the window of our vantage point – they were going to do the scene!  I clambered up on the window ledge and started the camera running.  “Flames up,” bellowed the guy with the bullhorn who I had earlier concluded must be the Director, and the bus began burning brightly.  So too did the demolished car lying on top of it, and a few other cars pancaked on top of one another a little further down the street.  My eye was fixed on the guy standing atop the catapult truck;  I knew he was going to play a key role in this delight.   A countdown started.   The numerous black powder charges that had been carefully stowed all over the set in the general vicinity of the bus detonated and there was a monstrous bang.  This was it, the moment of truth – the “explosion” had happened and now it was time for the car to go flying.  I sucked in just a little bit of breath and braced myself for the coolest thing I had ever seen.

And some fucker yelled “Cut!”

Apparently, something was wrong with the timing of the explosion, or things were burning just a bit too brightly in places.  It doesn’t really matter.  The important thing is that the catapult did not get triggered.  The car did not go flying.  Instead, a bunch of firemen moved in and doused the whole set with a crapload of water.   It was obvious that they would not be attempting to film this sequence again anytime soon – the black powder would have to be replaced, surfaces dried, the flammable jelly lovingly re-applied.   It would be at least another hour before they could even attempt to do this thing again.

Despondent, I uttered a curse word and went home to bed.  But this guy managed to get video of the whole thing.