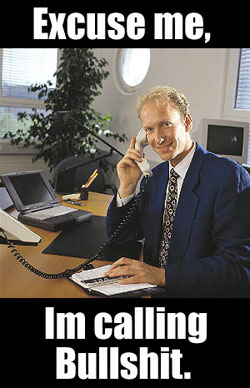 I checked tsn.ca for the final score of the Leaf game this morning when I got to work. I just needed to know how badly the Leafs had lost. When I tuned in to the game last night, it was late in the first period, 2-0 for the Kings. No sooner had I set the remote down and settled back in my favourite chair to watch, it was 3-0 and I began to mutter about Andrew “Razor” Raycroft’s inability to block a beach ball with a snow shovel* when Andy Wozniewski fired the puck over the glass in the Leafs’ zone: power play Kings, and in about 40 seconds it was four – zip Kings. I clicked the game off, breathed a few curses and went to bed.

Anyway, TSN’s site gave me the expected bad news. That was an abomination that I fully expected to find. In the comments section below the article, however, I happened to notice (purely by chance, I’m not in the habit of reading those comments, for reasons which will become painfully obvious) one particular entry. Some brainiac waste of skin going by the handle “I_HATE_THE_NHLPA” had posted, below the story about the 5-2 final score, the following alarming bit of shite:

Simply horrific. Trade Sundin for 2, maybe 3 1st rounders and some good talent for the rest of the season. What a joke…

This is the kind of stuff that makes a guy’s brain explode; it’s the reason I don’t EVER listen to talk radio, especially sports talk radio. Mere possession of a phone and the ability to dial a 1-800 number does not qualify one to debate an issue intelligently. It’s the reason that I am increasingly finding myself dealing with more than a little self-loathing as a direct result of identifying myself as a Maple Leaf fan; I feel guilty of all manner of offence merely by association with some of the most troglodytic fans on the face of the earth.

Never mind the part about trading Sundin. There are pros and cons to sending Mats to another team as a rent-a-player; at this moment, I am far too interested in ranting about the remainder of this idiot’s post to stop and discuss the relative merits of each position on that issue. The bit of un-logic that almost knocked me out of my chair was the suggestion that he ought to be traded “for 2, maybe 3 1st rounders and some good talent”. How many teams exactly is our friend the caveman suggesting that Sundin ought to be traded to? Who has two or three first round draft picks to spare – last time I checked, each team only gets one per round, unless they’ve acquired another team’s selection through trade or other (free-agent related) compensation. According to wikipedia, the only teams with multiple selections in the first round of the 2008 entry draft are Nashville and Los Angeles, each of which has two – not three – first round picks. In view of the fact that Nashville and L.A. are presently in twelfth and fifteenth place respectively in their fifteen team Conference, I would suggest that it is highly unlikely that either team will be tooling up for a Cup run and therefore looking to trade their first round picks for thirty games’ worth of Mats Sundin. On that basis alone, our budding wag should be sentenced to reading his own comment for the duration of his natural remaining life, a horrible fate from which the only relief would be the cold and final embrace of death.

Leaving aside that monumentally asinine failure of basic logic, our friend the NHLPA hater feels that not only should the Leafs be able to negotiate a trade that will require their trading partner to spontaneously generate (and trade away) an additional first round draft pick, presumably unbeknownst to the other 28 NHL clubs; he (you know it’s a guy) also believes that management will have failed if they do not also succeed in getting their evidently functionally braindead trading partner to also include “some good talent” with that trio of first round picks. Hey, why not hold out for Sidney Crosby, one make that beelion dollars and some sharks with lasers attached to their heads?

Honestly, it’s unmitigated crap like this that seriously makes one re-think the importance of freedom of speech in our society. In the future, maybe we should have our schools hold off on teaching the mouth-breathers any form of written expression; it might make teh Intarwebs a little more tolerable for those of us who haven’t been continuously assaulting the only two brain cells we ever had with alcohol and crack cocaine. The only other possible solution is to keep all the crayons locked up behind glass so that dickheads like this can’t scrawl their verbal diarheea down on the nice colourful construction paper and take them to Mommy to post on the Internet.

Um, okay. I think I’m done ranting now. As you were.

—–
* Seriously, Andrew. You’re only job was to soak up 60 minutes of playing time last night, against the worst team in the NHL. The only expectations we had of you involved you managing to find your way out on the ice and stand between the red posts until the game clock expired so that Vesa Toskala could rest his ailing groin. The only really bad thing you could do – the only way you would fail – would be somehow making it necessary for Vesa to relieve you in goal. Not only did you fail so miserably at this that Toskala was manning the twine tent by the beginning of the second period, it so happens that he aggravated his injury filling in for your sorry ass. End result? We have to call up Justin Pogge – a young man who it would be fair to say has struggled in his two years with the Marlies – and have him fly two thousand miles across three time zones to strap on the pads against the Pacific-division-leading (and second place overall) Sharks. Tomorrow night. Well, this should work out just ducky. Um, “Razor”? Are you familiar with seppuku?